In a corner of Cambridge that’s best known for biotech labs, two recent college graduates are experimenting with creating better public spaces on the ground floor of a massive, otherwise-empty office building on Kendall Street.

Allie Girouard and Aaron Greiner are the co-founders of CultureHouse, a self-described “urban design test kitchen” that has secured a temporary lease at 500 Kendall Street to run a community living room for the summer and fall. There, drop-in visitors are invited to relax on the sofa, play ping pong or some board games, read from the library or take advantage of free wifi, or enjoy a free cup of coffee or tea served by Girouard, Greiner or other CultureHouse volunteers, who staff the space from behind a former kitchen counter (the space had been a coffee shop when the building was first built). 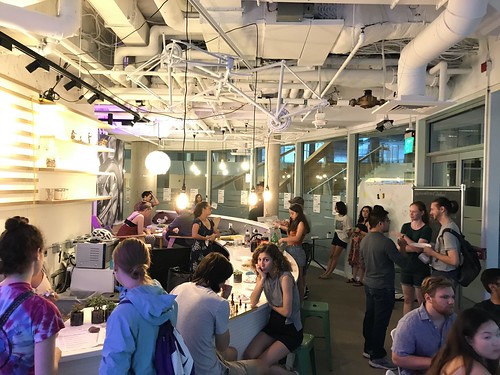 “We wanted to apply tactical urbanism in a way that feels a bit more permanent, and lasts a little bit longer but still allows us to do flexible, low-cost implementation,” says Greiner, who was inspired in part by a summer internship at the Better Block Foundation, the organization known for doing temporary street safety and public space improvements.

Girouard, a sociology student, sees the project as a case study in symbolic interactionism – which she described as the study of “how we interact with symbols.”

“You see that building over there” – she gestured at another 21st-century mixed-use building outside the front window – “and you have specific associations with it. You think to yourself, ‘Those are expensive condos, certain people live there, but it’s not a place that would feel welcoming to me,'” said Girouard.

“Stuff that subverts those kinds of symbols and expectations is very useful,” she continued. “We put a swing right inside the front door here – something that people associate with kids and play – which is not something people expect to see in a corporate office building in Kendall Square. And the sofa tries to make it feel like a living room – people feel at home here, and it’s not just because we say it’s a living room; it’s how it’s designed and how we react to the stimuli.”

“People actually offer to wash the dishes for us!” said Greiner.

“Yesterday there were two different families here who kind of vaguely knew each other because they both live nearby, but they were striking up a conversation here while their kids were playing games,” said Girouard. “This was a chance for them to chill out and finally get to meet each other.”

CultureHouse also has a robust program of public events to attract neighbors to the space outside of the 9-to-5 working hours, including Thursday trivia nights, Sunday ping-pong tournaments and other events. This Saturday at 8 pm, local folk singers Sweet Petunia will offer a concert there.

And they’re looking for other vacant storefronts to add life to. “Our lease here will end in the fall, but our goal is to be continuously open, and find a new place to move into when this ends,” said Greiner. They’ve also published an open-source manual to encourage others to start their own pop-up spaces.

In the meantime, you can drop by CultureHouse on 500 Kendall Street in Cambridge, 4 blocks northeast of the Kendall Red Line stop, from Wednesday through Sunday, 10 am to 8 pm.